Sweet Christmas to you all!

Bradele biscuits or also referred to as Bradela are bite-sized biscuits from   Alsace and Moselle, France. They date way back to the 14th century and the tradition has it, that on Christmas time each family has to bake it’s own. And then offer them to other people around them. They come in all different shapes and decorations. They are usually flavored with cinnamon, orange, anise, honey, and almond. 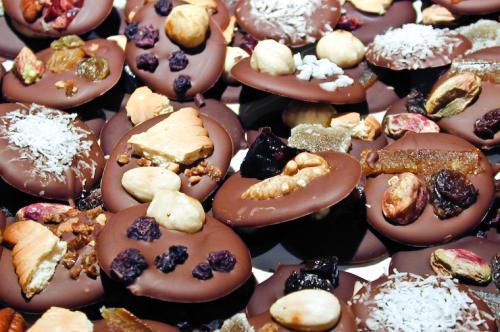 Another traditional French Christmas sweet are these chocolates, topped with dried fruit and nuts. Traditionally they symbolize the four mendicant monastic orders and the color of their robes: raisins for the Dominicans, hazelnuts for the Augustins, dried figs for the Franciscans, and almonds for the Carmelites. They look beautiful and are also easy to make which makes them perfect for handmade Christmas gifts. 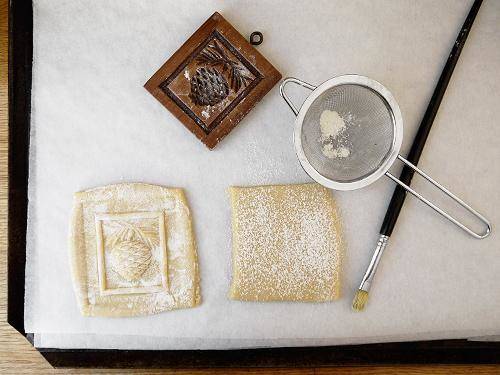 These cookies are made from a firm dough traditionally made with only 2 ingredients wheat flour and honey. The dough is put in a wooden mold to give the cookies all different kinds of shapes like that of animals, floral motifs people or even landscapes. Filled with old-fashioned charm these Christmas cookies are perfect for decorative purposes since they are pretty firm and long-lasting. 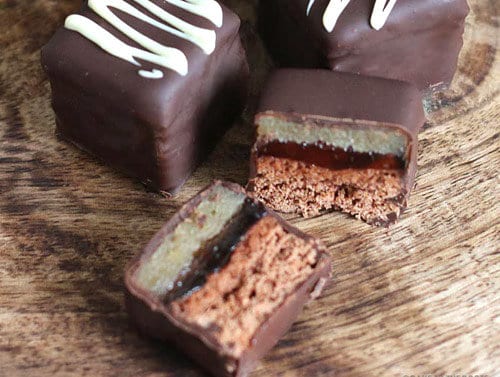 These “Domino Squares” aka Dominosteine  are made with a layer of gingerbread, a layer of jelly and a layer of marzipan and then they get all covered in chocolate. These small chocolate squares are a delicious alternative to the classic gingerbread. 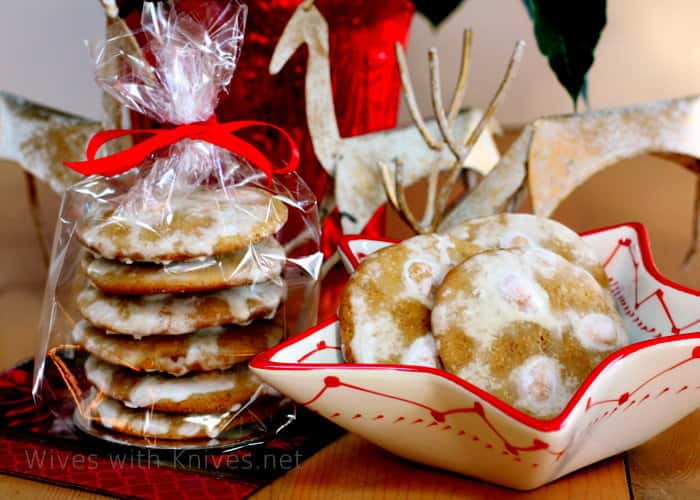 German people really know how to celebrate Christmas. Along with all the festivities, they have a big bunch of Christmas recipes to share. Another highlight of their traditional Christmas sweets are these Lebkuchen cookies that are pretty similar to gingerbread. They are usually soft but a harder type is also produced and inscribed with icing to be sold at Christmas markets in Germany. They are usually made with honey, spices, and nuts. This recipe for Lebkuchen is for making soft chewy ones. 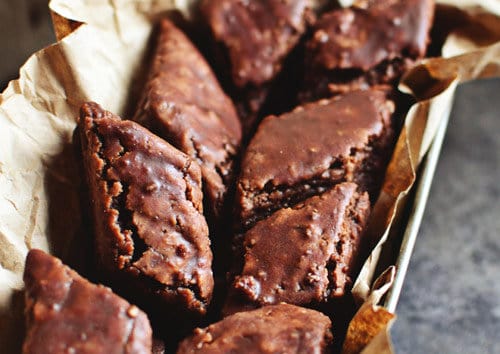 It’s a sweet glazed biscuit, again pretty similar to a gingerbread cookie. The exact translation of the word Magenbrot is “stomach bread” and that’s because people used to believe it helped with digestion. It usually contains honey, cinnamon, cloves, nutmeg, and cocoa. Although the recipe originated in Northern Switzerland, and Southern Germany it is now sold on Christmas markets all around Europe. 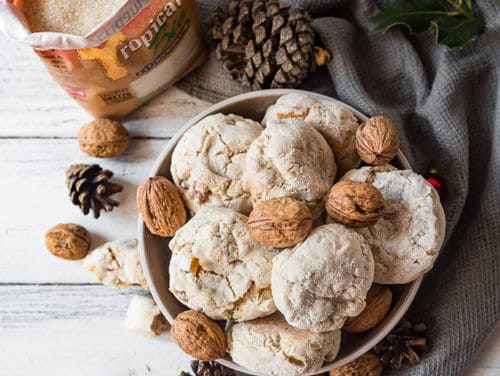 Cavalluci cookies are originating from Tuscany and their name comes from the word Cavalli which means horse in Italian. And that’s because they were originally imprinted with the image of a horse. Cavallucci are made with anise, almonds, candied fruits, coriander, and flour. They are rustic and bashful on the outside, but sweet and flavourful inside. 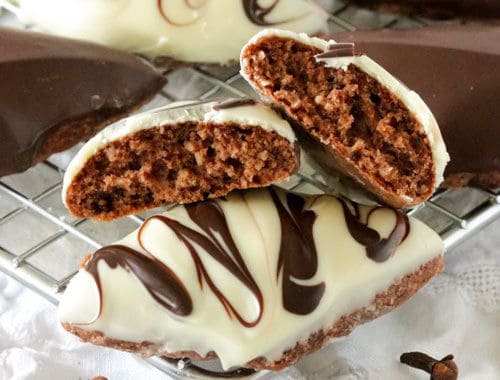 Another delicious Italian Christmas cookie Mostaccioli or also known as Mustacciuoli . It’s a traditional cookie from Naples that comes in a rhomboid shape and is coated in a chocolate glaze. They usually come in a large size of 10-12 cm but you can also find them in a size of 6 cm. They are made with ground almonds, honey, and are scented with orange zest, cloves, cinnamon. 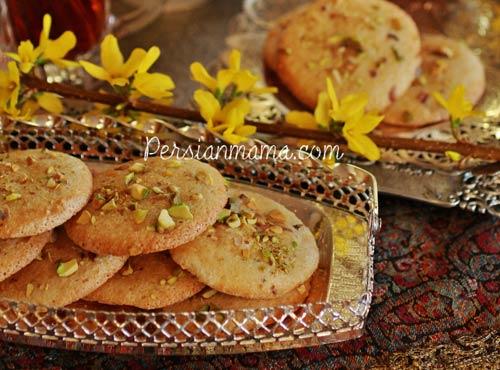 Ghorabieh or Qurabiya is a Christmas cookie that originates in the city of Tabriz in Iran. It made its first appearance in the Ottoman cuisine in the 15th century. It’s a shortbread type of biscuit that is made mostly with almonds. It has many different variations throughout various countries like Bulgaria, Spain, Greece, Turkey, and Mexico. The authentic Iranian ones are topped with pistachios. 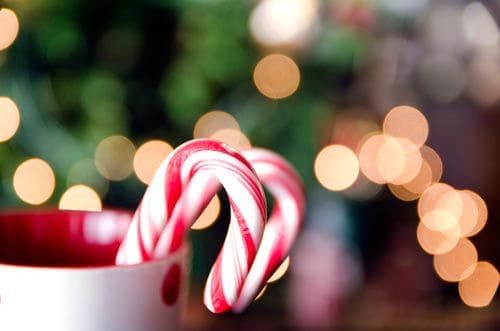 Candy Canes originated in Germany where according to folklore, a priest ordered these to be made by a local candy maker in order to give them to the children who visited his church and keep them quiet during the Living Crèche (tradition of Christmas Eve). In the early 1920’s they start to be produced in Albany, Georgia by Robert McCormack. His company will end up becoming the world’s leading candy cane production. They are a candy in the shape of a cane flavored (traditionally) with peppermint. 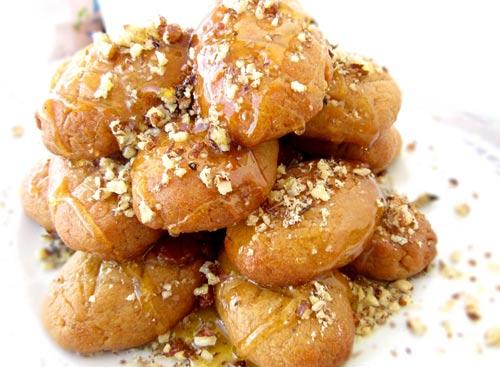 These cookies that are similar to gingerbread are the Traditional Greek Honey Cookies. Packed with flavors and aromas. Their dough is made with olive oil, honey, and semolina to make them even more crumbly. After being baked they’re soaked in a honey syrup and topped with extra honey and chopped walnuts. Melomakarona can be found in every Greek home during Christmas since they are considered one of the best Christmas desserts. 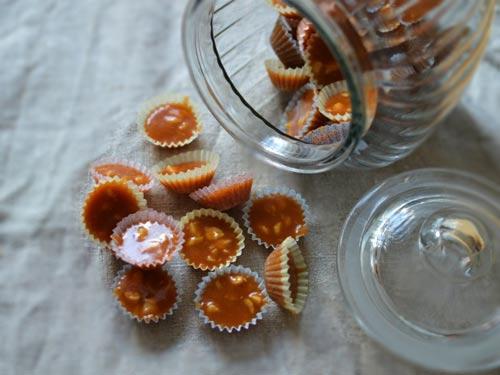 A traditional Swedish Christmas toffee Knäck translates into “brake” due to its (usually) hard consistency. Since it’s made in a way that caramel is made, it leaves you to decide on its texture. You can make it soft and chewy, or hard as a rock. That really depends on your liking and how quick you remove it from heat. 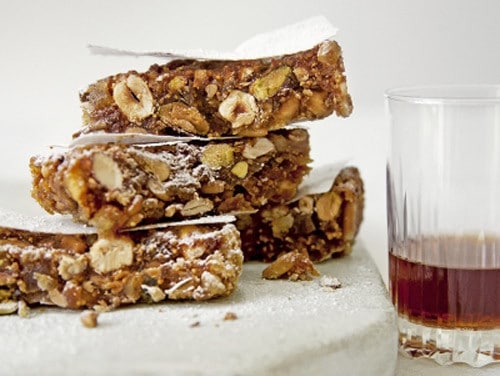 Panforte is a famous chewy Italian delicacy that’s filled with nuts, fruits, and spices. It has also a long history that dates back to 13th century. Its name literally means “strong bread” because of the strong spicy flavor. And like every old-fashioned dessert it keeps well and uses few ingredients. It’s also pretty easy to make. 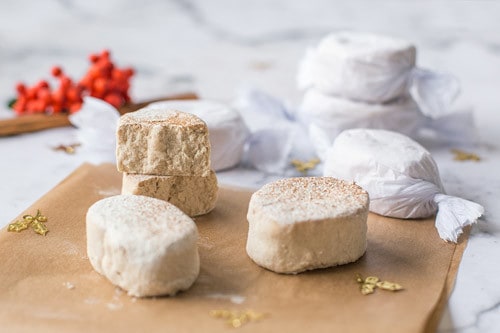 A traditional Spanish shortbread from Andalusia. The word “Polvo” in Spanish means powder/dust which refers to the crumbliness of these biscuits. They’re heavy yet soft, melt in your mouth biscuits. Polvorones can be found in other places other than Spain. Like in Latin America and the Philipines. As for the ingredients? Prepared to be amazed… They’re made with only 4 ingredients that of pork lard, flour, sugar, and cinnamon. Don’t judge before you try them… 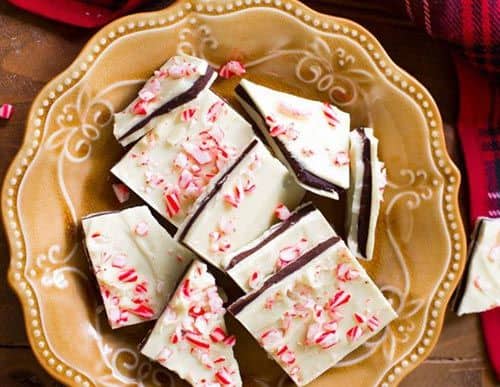 Dark chocolate topped with white chocolate and peppermint candy pieces. A festive Christmas delicacy that fulfills both your chocolate and candy cravings. One of the easiest Christmas chocolate-candies to make, and a beautiful edible gift for your loved ones. Peppermint Bark is thought to have appeared around 1960’s in Florida. 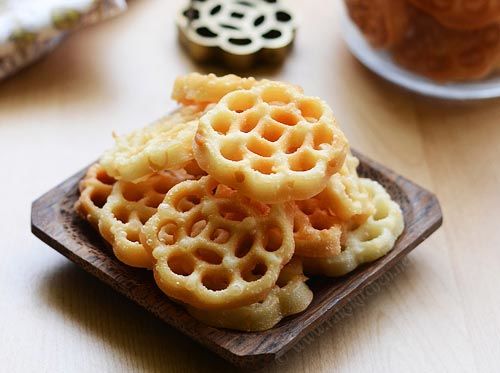 The Acchu Murukku or also known as “Rose Cookies” are peoples in India, favorite Christmas treat. They’re pretty unique and look like a piece of art. They are made with coconut milk, rice flour, and sugar. They are fried using a mold to give them their distinctive Rose shape. Wanted to try something different this Christmas? Maybe this is it. Just make sure you get yourself a Rose Cookie Mold first. 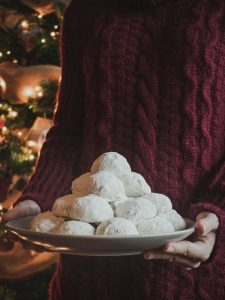 These pretty shortbread snowballs, are filled with nuts, usually almonds, and are completely coated with icing sugar. They are a melt in your mouth cookie, that you can find in every Greek home during the Christmas holidays. Along with the Melomakarona cookies.Tradition has it that before you go to sleep, on Christmas eve you leave one “Kourabie” for Santa, next to the fireplace, along with a carrot for Rudolf. So when he comes to leave the presents at night he will find it and eat it. Just make sure you won’t add the Christmas gifts under the Christmas tree, and forget to eat it. As your kid may get a bit confused. Although you can always blame it on mommy’s cooking skills… 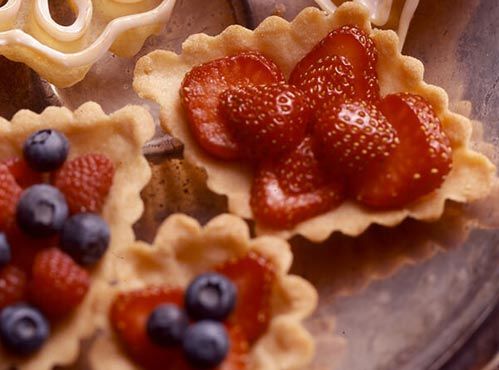 Sandbakkels means sand tarts and refers to these beautiful Norwegian sugar cookie tarts. Served on Christmas time in Norway these utterly delicious cookie tarts require only 5 ingredients: flour, sugar, egg, butter and almond extract or brandy for flavoring. You can be creative with this cookies as you can dress them with anything you like… 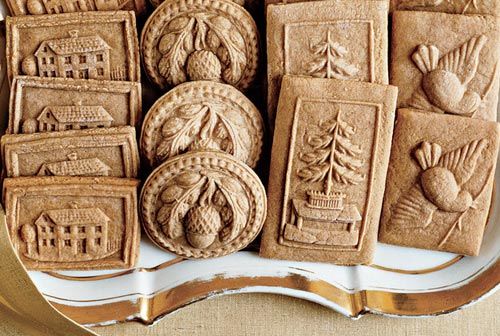 Ok, so to me these are the most beautiful cookies I have ever seen. Speculaas are a Dutch thin, very crunchy, caramelized cookie. They contain spices similar to gingerbread and they’re traditionally baked 1 day before or on St Nicholas’ day on 5th of December. The images on these cookies are made using molds and usually represent stories about St Nicholas. Perfect to use as edible Christmas decorations. 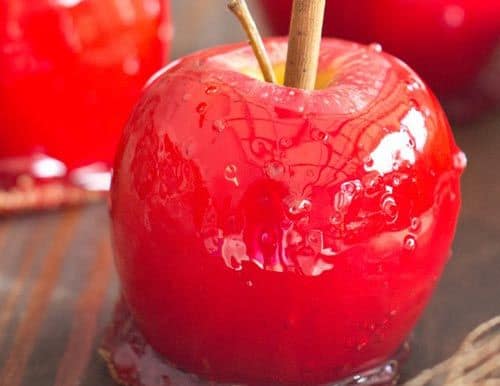 Also known as Toffee apples are whole apples on a stick that are coated with a hard toffee or candy. They are sweet tart and crunchy. They are also a common sweet treat for Halloween as well since it falls in the apple harvest season. Either way, it’s a beautiful looking candy for any wintertime celebration. 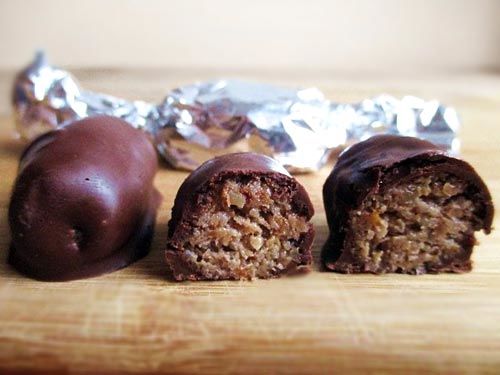 Do you find undressing the Christmas tree a boring procedure? Then you might want to try dressing it, with these traditional Hungarian and Slovak chocolate ornaments. Szaloncukor is a chocolate covered bonbon that comes in a variety of flavors, that are wrapped in colorful shiny foil, and hung on the Christmas tree. They might be difficult to pronounce but they’re very easy to consume. Since every household in these countries, seems to consume about a kilo and a half of these every Christmas. 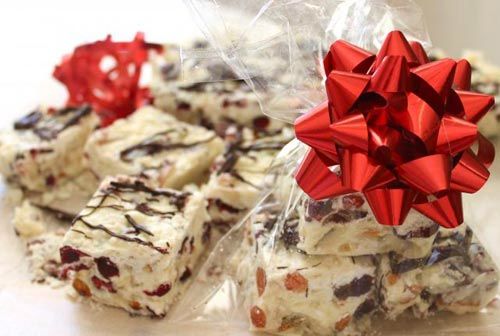 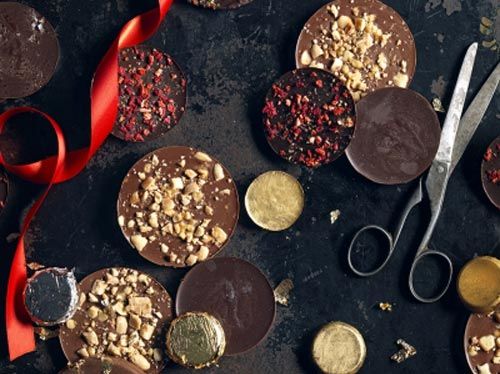 This was definitely my favorite Christmas treat when I was a kid. All kids like to be given money let alone chocolate money. I was really going WOW when I’d see these. And now I’m really excited to have found a grown-up version, that you can actually make at home. Thanks to Jamie Oliver. As for their history, the legend says that St Nicholas who was a bishop in Lycia (today Turkey) wanted to help little children bu giving them money. So one night he climbed up a chimney and dropped a bag with coins. The bag landed inside some stocking that a girl has let to dry next to the fire. 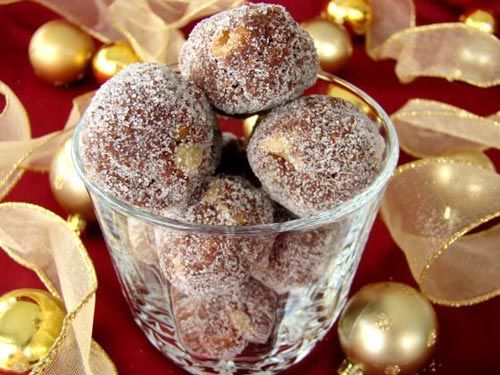 Otherwise known as Truffles or Sputnik, these chocolate balls have one thing in common they taste AMAZING. They usually use wafers, cookies or cake as a base along with cocoa powder or chocolate. Brandy is used for flavoring as well as a variety of different coatings, like desiccated coconut, cocoa powder, and nuts. 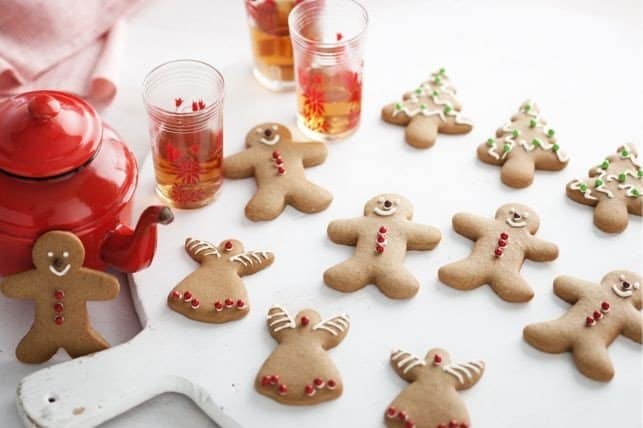 And I saved the best for last. If you think of Christmas then gingerbread definitely comes on your mind. Whether it’s a cookie, a cake, or a ginger house. There are countless variations of gingerbread, throughout many countries around the world. The base is the same though, flour, sugar, and butter along with Gingerbread’s distinctive spice mix, of ginger, cinnamon, cloves, and nutmeg.