Published: Jan 4, 2019 · Updated: Jun 7, 2020 This post may contain affiliate links As an Amazon Associate I earn from qualifying purchases

Fasolatha is one of the most favorite winter comfort foods in Greece. It’s a thick and creamy white bean and tomato soup. Delicious and nourishing, all made from scratch using basic fresh ingredients.

This old-fashioned Greek soup is made on the stovetop using dried white beans that have been soaked overnight. We never cook using canned beans in Greece. In fact, I’ve never come across them in a grocery store either. Except for these giant beans that are already cooked in a tomato sauce.

We’re very old-fashioned when it comes to cooking in Greece. And we truly believe, that something that’s cooked from scratch, is always healthier. Now the only problem with dried beans is that they require quite some time (up to a few hours) in order to cook.

So if you don’t have that much time to spare you can always cook the beans in a pressure cooker until they get tender and then finish off on the stovetop, along with the rest of the ingredients for the soup. Or you can use a slow cooker and slowly cook everything at once.

Whatever you choose, make sure you ALWAYS bring the beans to a boil first and throw away the water they have boiled in. In order to remove all dirt and foam from beans.

To Make This Soup Using A Pressure Cooker:

To Make This Soup Using A Slow Cooker:

How many times I’ve woken up on a cold & rainy wintry morning to hear someone in the family say –Now that’s a day for some Fasolatha!

I don’t know what is it with this soup that makes it feel so comforting. Maybe it’s that nice and thick texture that’s so perfect for dipping your bread in. Or maybe it’s your body saying –Thank you for such a healthy and nutritious meal on such a bad day.

Whatever it is, it’s one of the best and most nourishing meals to have.

NOTE: Make sure you use quality olive oil since this is what’s going to give your soup a velvety thick texture. This is one of my trusted extra virgin olive oil labels. See also my post explaining how to skip fake olive oils.

With What We Serve Fasolatha In Greece

Now here’s the best part of this delicious White bean soup recipe. The side dishes. Traditionally a Greek Fasolatha is served along with some salt-cured fish like sardines. This tradition goes way back to Ancient Greece.

Ancient Greeks used to make a salty sauce out of the innards of the cured fish and use it to flavor all of their legume soups. Today we simply serve the salt-cured fish drizzled with olive oil and vinegar, as a side dish to this soup.

Other stuff we usually serve along with Fasolatha is Feta cheese, olives, or even raw onions. In the Northern parts of Greece, you may even see this soup served with spicy Greek sausage. Since nothing goes better with beans then sausage!

Whatever you choose don’t forget some rustic bread for dipping and a good sprinkle of freshly ground pepper on top!

A lemony version of Greek Fasolatha that’s equally delish but also serves as the perfect base to incorporate some bacon, or sausage, or your fave greens to it. Instructions for this in the post. As well as instant pot + slow cooker recipe instructions! 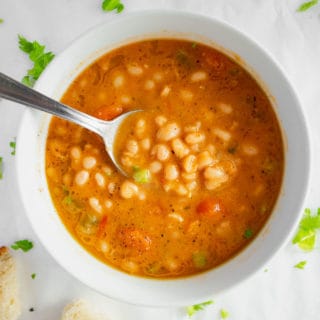 Hey or Yiasou! (as we say in Greece). I'm Fotini and cooking is my job as well as my passion. Here you will find all the Authentic Greek Cuisine Recipes. One of the oldest and healthiest cuisines in the world. To learn more just click here...

Hey or Yiasou! (as we say in Greece). I'm Fotini and cooking is my job as well as my passion. Here you will find all the Authentic Greek Cuisine Recipes. One of the oldest and healthiest cuisines in the world Read More… 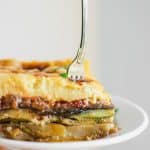 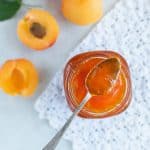 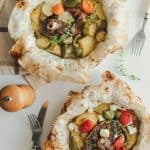 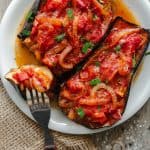