These old-fashioned cookies that come under the name of Isli have their roots in Asia Minor dating a few hundred years back. Their dough is made with semolina which makes them really crumbly yet soft due to the syrup they're soaked in. They are also filled with ground walnuts in the center and soaked in a honey syrup.

These cookies are very similar to some other Greek Christmas Cookies called Melomakarona. In fact, some people in Greece refer to Isli as stuffed Melomakarona. Since they are both made with semolina, are soaked in syrup with honey, and also have walnuts.

The main differences between those two cookies are that for one, Isli are much crumblier while Melomakarona are soft. For two, these Greek Christmas Cookies are stuffed with walnuts instead of just adding them on top (like it is done with Melomakarona). And you may think there is no big difference there, but biting into one of these walnut-filled cookies will make you think again. They make the texture of the cookies so much crumblier, that every bite feels just like a piece of heaven.

And thirdly, Isli are not that overloaded with spices. They have lighter flavors of orange, cinnamon, and just a hint of nutmeg. Instead of stronger spices like cloves. I have also added a tablespoon of unsweetened cocoa powder to the filling. That is not in the authentic recipe but believe me when I tell you, it does make all the difference in the world. As it balances the sweetness of these cookies so nicely.

This is the first time I made these cookies. Just like so many old-fashioned recipes Isli are not so well known nowadays. Therefore, I didn't know their existence up until this year. Since Melomakarona are so similar to Isli, and quicker to make people stuck with those instead. Making them every year-round. There is no Christmas in Greece without them, and Kourabiethes (almond shortbread snowballs) as well.

And truth is, that Isli are in fact a bit more time-consuming to make (having to fill each cookie) but certainly not difficult. I will literally be making them every Christmas from now on. That good they taste.

What tricks people into thinking that Isli are difficult to make is their appearance. Traditionally Isli are shaped like a triangle or almond. Then women used special tweezers to embroider the surface of the cookies. Today this is done mostly using either a fork or a knife. So if you don't pay much attention to appearances (mine look far from perfect), and don't mind spending the time to fill cookies, then Isli are definitely easy to make and totally worth it!

Secondly, make the cookies. The dough is very simple to make and I've included some picture instructions below to help you out with the shaping of the cookies.

Thirdly, prepare the syrup so it will be ready to dip the cookies in it once they're baked.

To get really soft cookies on the inside, both the cookies and the syrup need to be hot when the cookies get soaked into it. If you want more crunchy and less soft cookies, let either the syrup get lukewarm before dipping the hot cookies into it. Or either use hot syrup and cooled cookies.

To make the syrup you simply add sugar, water, honey, orange juice, orange peel, and a stick of cinnamon in a wide enough pot (so there will be space for the cookies) and simmer for 6-7 minutes over medium heat.

Make the cookie dough in a mixing bowl, (you needn't use an electric mixer for it). It's a really soft and easily knead-able dough. Just mix the liquid ingredients first with a hand whisk. And then add the fine semolina and flour in batches until a soft dough forms. 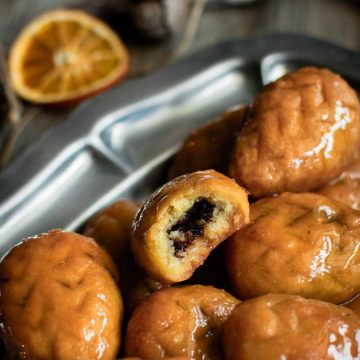