This Layered Dessert recipe is from one of the first pastry shops in my village. The shop itself has closed long ago but this recipe is so good that it has survived until now. And is going to have a long future with me and my family because it's incredibly delish!

My mother got the recipe from a friend of her's (from the family who owned the pastry shop) 20 something years ago and since then we always make this layered dessert at least once a year on a celebration (either Christmas like I did this year or on a name day etc...).

It's a very old fashioned dessert like the ones you see in the post-depression era. It's a version of Ekmek made with a chocolate layer.

The Layers & The Ingredients Used

In this recipe, syrup-soaked toast rusks are used as a base. Then a chocolate cream made with cocoa instead of chocolate is spread over them, a very creamy vanilla cream on top (that's made off Morfat and sweetened condensed milk), + plenty of crushed walnuts.

Morfat is a heavy cream substitute. It's skimmed milk with vegetable fat preserved in a can for long shelf life. You can search for it in a Greek food store or buy online.

But since finding Greek post-war ingredients like this may be a bit difficult or even expensive to buy online I'm going to give you a few alternatives that won't change the flavor of the final result noticeably.

Instead of the toast rusks, you can use shredded phyllo pastry as a base like in my other version of Ekmek Kataifi.

Also instead of making the top cream using Morfat & sweetened condensed milk, you can use a thick, homemade whipped cream (see Vanilla Cream Version No 2 in the recipe below).

Now ideally, the Morfat version is the best as it yields the most creamy whipped cream but the homemade whipped cream will be equally good as well.

This Layered Dessert is great to serve when you have to feed a crowd. It doesn't take long to make (although it ideally has to be refrigerated overnight) it's pretty easy and simple (no baking required), and yields plenty of portions.

I cut it into 20 large square pieces that you can easily break down to more. I just like to serve a big piece of it because it's that good that everyone loves it.

Another classic version of Ekmek. Made with Kataifi (shredded phyllo pastry), vanilla custard cream, fresh homemade whipped cream, nuts, and cinnamon. You won't be able to pick which one is the best! 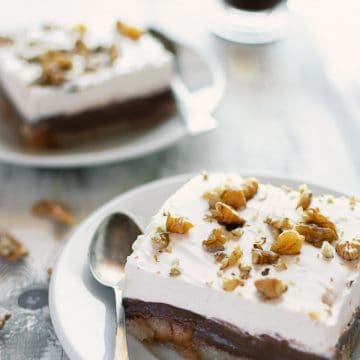 For The Chocolate Cream:

For The Vanilla Cream (Option No1):

For The Vanilla Cream (Option No2)

For The Chocolate Cream:

For The Vanilla Cream (Option No 1):

For The Vanilla Cream (Option No2):