Stuffed Squid is a delicious seafood dish that can be served both as an appetizer or main dish.

The stuffing is a real flavorful one, made with rice and plenty of veggies. And it gets cooked separately first before it is added to the Squid.

And once the Squid is stuffed it gets cooked in a rich tomato sauce. Which is in fact one of the best sauces for bread dipping. One of the reasons why it's such a popular Meze dish in Greece. Meze= appetizer plate that accompanies alcohol like Ouzo.

Is Squid The Same As Calamari?

Squid is almost the same as Calamari. Actually, you can even use Calamari to make this recipe. The only difference between the two is that Squid is usually larger in size and its meat can be a bit tougher. That's why it is better cooked slowly like it is done in this recipe.

Whereas, to make fried squid it's better to use Calamari which is smaller in size and more tender. Another way to tell the difference between which is which, is the side fins. In squid, the fins are shorter towards the narrower end of the body. On the other hand, Calamari has wider full-body fins.

Squid is meaty and has a similar flavor to that of cuttlefish and octopus. Especially when cooked inside a sauce. The sauce, on the other hand, has a strong flavor similar to a sauce in which you have cooked fresh crabs (for those who have ever tasted such a thing). If you are not familiar with such a flavor just think of a sauce flavored with lobster and a hint of seafood ink. I can't think of a better way to describe it really 😀

How To Make Stuffed Squid

First, prepare the squid. Remove all that's inside the squid including the bone. Finely chop the legs to sautee them and use them inside the stuffing. Then sautee the veggies and rice and let the rice cook with some water for a couple of minutes.

Stuff the squid using a spoon. Here's one thing you need to pay attention to. Don't overstuff the squid. Don't press the stuffing inside the squid too much. The squid's body shouldn't look like it is about to explode. Also, leave some space right at the top (about 2 cm/ 1-ich). This, as well as the toothpicks used to close the squid, ensure the stuffing won't come out of it while it cooks.

A couple of sides that go nice with this Stuffed squid are these baked potatoes with vegetables, some Skordalia (potato & garlic mash), or a simple and fresh potato salad. 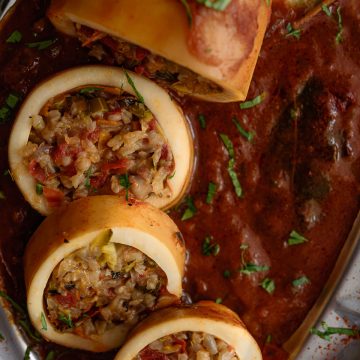