What's your favorite dessert? Whatever your answer, I've got to tell you, that this scrumptious Baklava Cheesecake can easily steal its place and your heart!

Just think of a softer Baklava, loaded with nuts (almonds, walnuts, pistachios) and completely soaked in a honey-flavored syrup. Plus, a thick cream cheese topping on top!

Although Baklava Cheesecake is not a traditional Greek recipe but more of a modern alteration, it is made in the same fashion as other traditional Greek Desserts. The Baklava in this recipe is actually something between a Portokalopita (with its syrup-soaked phyllo base) and a Semolina Almond Cake (with meringue + yogurt + almonds+ syrup).

Easier Than It Sounds To Make

And even though it may sound intimidating to make, it's in fact pretty simple. As you don't need to layer the phyllo sheets with nuts like you would do in a classic Baklava recipe. Instead, you cut all the phyllo into little pieces and bake it in a pan on its own. Before combining it with the remaining ingredients for the Baklava base. So you don't need to worry about tearing the phyllo for example.

Then once the phyllo is chopped into pieces and baked until it gets a golden brown color all over, you make a cake batter to combine it with. By beating separately, the egg yolks with sugar until thick and foamy, and the egg whites with sugar into a thick meringue. These two mixtures are then combined with some Greek yogurt, and a bit of baking soda to create a real airy mixture. Be gentle with the stirring at this point to keep the air in the mixture.

You can then add the baked phyllo into this mixture in handfuls at a time. And once all the phyllo is combined, stir in the melted butter and the nuts.

As for the nuts, I place all the nuts (walnuts, almonds, + pistachios) in a blender along with the ground cinnamon and cloves and blend until the nuts look finely chopped. If you blend the nuts too finely you lose on some of the delicious crunchiness.

As for the syrup, it has to be at room temperature when poured over the Baklava. So before starting on anything else, prepare the syrup by adding sugar, water, honey, cinnamon stick, lemon juice, to a cooking pot, and heat over high heat. Once it starts to boil, reduce the heat to medium and simmer for about 8-10 minutes. Until the sugar dissolves completely and the syrup gets nice and syrupy-thick.

Then remove the pot from heat and just set it aside at room temperature while you proceed on making the Baklava.

A ground nut mix along with some cinnamon on top. Or you may even add a drizzle of raw honey as well. You can also sprinkle unsweetened cocoa powder on top. Or even serve with a cranberry sauce! 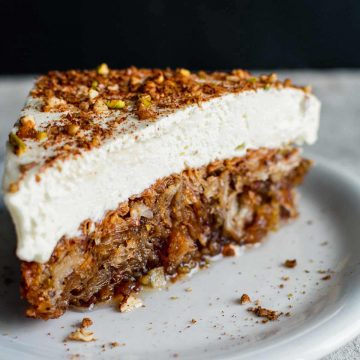 For The Baklava Base: