This perfectly glazed, crunchy piece of heaven, is in fact, a piece of Classic Greek Baklava. And it's literally one of the most irresistible desserts ever! Especially if it's properly made. There are mainly two things that can go wrong when making a Baklava.

The first is, to not be baked properly, leaving the phyllo chewy and whitish in color. And the second is not adding enough syrup, which leads to a very dry Baklava. No worries though, I have all the little tips and no-fail secrets you need, in order to avoid both circumstances. But also to avoid, any other situation that could possibly go wrong when making a Greek Baklava.

I have also included a step-by-step, picture tutorial to make it even easier. But first things first... Let's make clear of:

What is Baklava and what it's made of

Baklava is a crispy pastry dessert, made out of layers of Phyllo sheets, and a nut mix filling. It's usually almonds or walnuts, sometimes both, and sometimes pistachios are used as well. Traditionally it is scented with cinnamon and cloves, although orange zest may also be used as well. After it gets SLOWLY baked, a hot syrup made with honey is sprinkled on top. Giving baklava a caramelized, melt-in-your-mouth texture.

If you are a true fan of Baklava, don't miss this post with the TOP 5 BAKLAVA RECIPES.

An authentic Baklava should be crispy, crunchy, and pretty syrupy. You can easily achieve that if you follow the no-fail little secrets below. These are tips you learn after making Baklava a number of times. Or learn them from people who themselves have made Baklava way too many times. So here they are...

I hope you feel ready now for some Baklava making. Personally, I avoid making it too often because it's the only dessert I cannot resist (and I don't even have that problem with chocolate which is pretty addicting for most people ).

This recipe is using a large pan. If you want to make a Baklava in a classic 9 x 13-inch pan by trimming the phyllo and skipping the folding (as it is done in this recipe), check out my other recipe for Walnut Baklava.

Have fun and do tell me how it goes!

SPONGE CAKE BAKLAVA. Layers of crispy phyllo on the outside and a soft syrup-soaked pistachio & walnut cake in the middle. 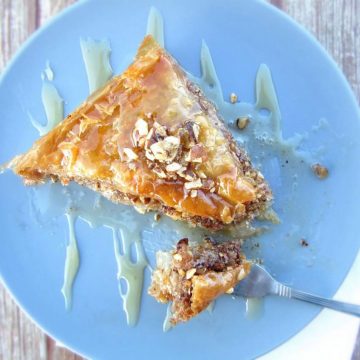 Greek Baklava Recipe With It's No Fail Little Secrets

18 1.6K
« 10 Greek Recipes To Give A Vegan All The Protein And Energy He/She Needs
Cheesy Mushroom Bake With Fresh Tomato Sauce (Manitaria Saganaki) »