This Greek Garlic And Potato Dip, is one of the dishes that really shows that the Greek diet is one of THE HEALTHIEST. We love garlic all right. We eat it a lot. But what’s more important, is that we eat it raw which boosts its health benefits even more.

I remember a friend of my grandfathers (Mr. Telis short for Aristotelis), that was the soul of every Greek Glenti (celebration). Dancing on tables, and flirting with women (A LOT) and doing all kinds of crazy stuff. Even though he was about 70 years old at the time. So I remember one time, that he was sitting with my grandfather, drinking and talking when I saw him grab 2 cloves of garlic in his hand and swallow them just like that.

Since I was only a child, I just sat and stared at him, with my eyes wide open and my mouth dropped. Couldn’t help but ask him why on earth, did he do that? He said -that’s how you become strong and live long. Today, he is still dancing and talking loud and partying a lot.  I believe he’s about 80 something now...

Now I don’t say that if you eat raw garlic you’re gonna live till your 100's (although it may be pretty believable to a child). But it sure is one of the foods that are well known for their antibiotic properties. And one of the best natural ways to reduce blood pressure. Therefore, good for a healthy heart.

What's Skordalia & What It's Made Off

Skordalia which is pronounced Sko-r-th-a-lia is soft and fluffy mashed potatoes with garlic, vinegar, and olive oil. We serve it either as a dip (a Greek Meze plate) or traditionally as a side dish to deep-fried cod (Bakaliaros Skordalia).

You can also serve Skordalia with many seafood dishes like SeaBream or Octopus for example.

Unlike the classic mashed potatoes, Skordalia contains olive oil instead of butter and cream which makes it lighter and healthier.

Also, the garlic and vinegar make it strong-flavored. Therefore ideal to serve as an appetizing dip with some Greek olives. We always add 1 olive on every dip plate (I don't know why, but it's a Greek thing).

How To Make It

Peel and cut the potatoes into small squares and boil over medium heat until they fall apart when you prick them with a knife. In a blender, add remaining ingredients and blend until garlic cloves turn into a thick paste.

Transfer potatoes in a large mixing bowl and keep the water they've boiled in aside. Add the garlic paste in the bowl as well. With an electric hand mixer with the whisk attachment on, start mushing the potatoes on low speed. Gradually add the water you've kept until potatoes look whipped and fluffy. 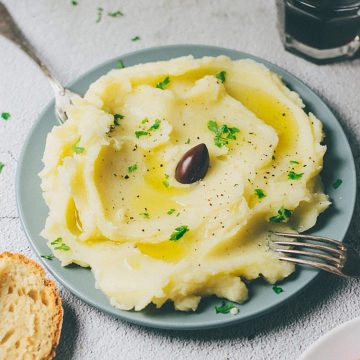