Did you know that instead of Santa Claus in Greece we have Saint Basil? It's the same guy with the red uniform and long white beard who brings the Christmas gifts and climbs down the chimney. Just under a different name.. And what does this have to do with this New Year's Cake? Well, it's named after him! Vasil-o-pita, where pita means pie and Vasil stands for Vasilis (Basil).

The Saints & The Greek Celebrations

And since I started telling you of these Saints I may as well finish so you'll understand where all these traditions came from. So, Saint Nicholaus (Claus), was an early Christian bishop (270-343 AC) of the Ancient Greek maritime city of Myra in Asia. Born in a wealthy Greek family, he spent his life and his wealth on helping the poor by opening hospitals and charities. Hence the Christmas spirit of giving and sharing.

Saint Basil was a Greek bishop in Caesarea Cappadocia (330-379 AC), Asia Minor. An influential theologian, who opposed to the heresies against the early Christian church. Again with a great life's work helping the poor and less privileged.

So Greek tradition has it, that on the 1st of January we serve the New Year's Cake (Vasilopita) with a hidden coin inside. We cut one piece for Saint Mary, one for Jesus, one for the house, one for the land, and then cut a piece for each family member. Starting with the eldest and ending with the youngest. Now whoever finds the hidden coin, is to have good luck for the whole year.

As for the cake itself, it's very soft, buttery, and very aromatic. Flavored with brandy and orange. But the best thing about it is the icing sugar and chocolate bits on top (that's my favorite part).

And yes, those are letters written with melted chocolate. Not very neatly though, since I'm used in writing this in Greek. You can easily do this using a piping pen. Just fill with chocolate and write like you would with a normal pen.

It's better to use some baking chocolate (Couverture) as it is meant for melting. You can melt the chocolate in a stovetop double boiler, or in the microwave. It takes 2-3 minutes on medium heat to melt in the microwave, but make sure you stir very well every 30 seconds so it won't burn on the sides.

The warmer the melted chocolate the runnier it will be so you'll have to use quickly. Be careful not to overheat the chocolate and burn it though, because it will lose its shininess and become firm. In that case, you can revive it by stirring in a bit of fat (butter or oil).

If you don't feel comfortable writing with the melted chocolate there are a few other options like:

When To Place The Coin In The Cake

Some people add it to the cake batter before it gets baked. I don't really find a reason for this, as it may land on the bottom, and can be easily seen when the cake is served. Ruining all the fun of searching for it.

The best way to add the coin is once the cake is baked. You carefully insert it in the cake keeping in mind how you cut the cake later on, so it takes less width space as possible. This way, it will land in one piece and not between two pieces when cutting.

As for the coin, go for something small enough to hide easily, but not as small that could choke someone (that wouldn't be too lucky now would it?) so don't forget to tell everyone about it ?. 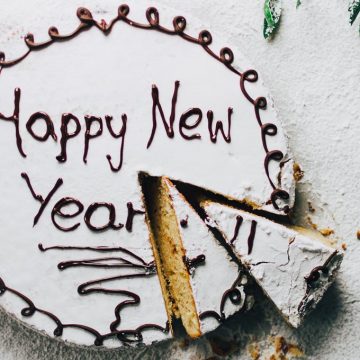