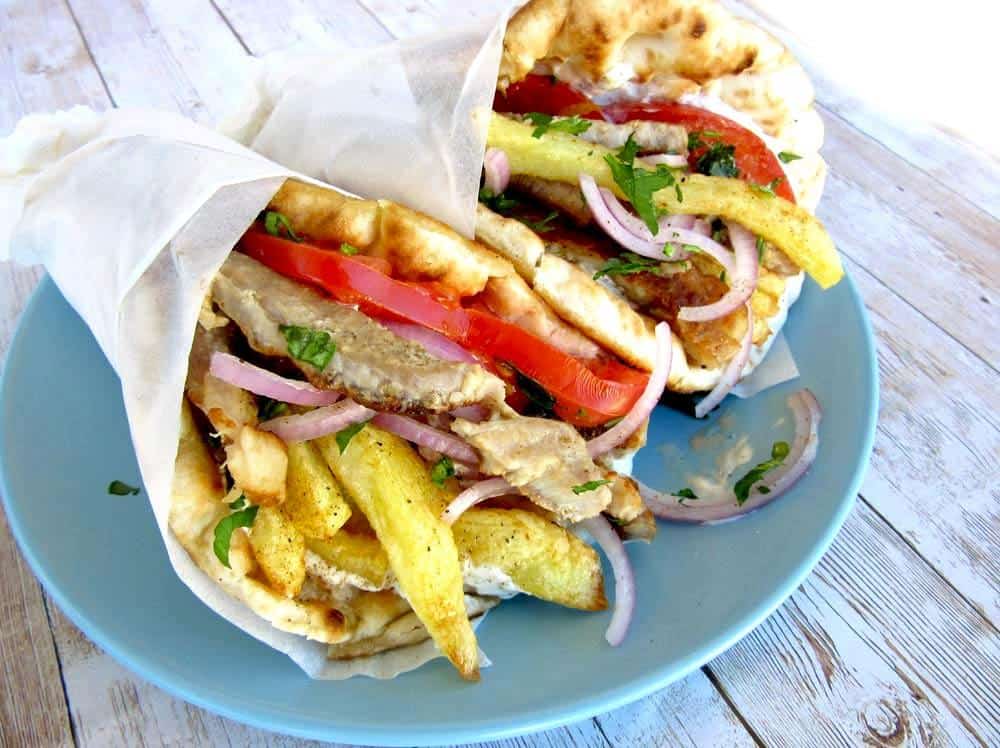 Really what is it? That meat that turns around on a spit and tastes so DIVINE? Well, to begin with, its something that everyone loves around the world. It's in fact pieces of fatty meat, that are added on a tall vertical rotisserie which turns slowly in front of an electric broiler. The point here is that the meat will cook slowly creating a crispy crust on the outside while soft and juicy on the inside. Once you start slicing off the outer parts of the meat, the meat keeps turning and cooking to create another crispy crust. So if you want a reaaally good Gyros, don't go to a place that's way overcrowded. No crispy crusty gyro there (since there is no time to create that crust if you cut it all the time). 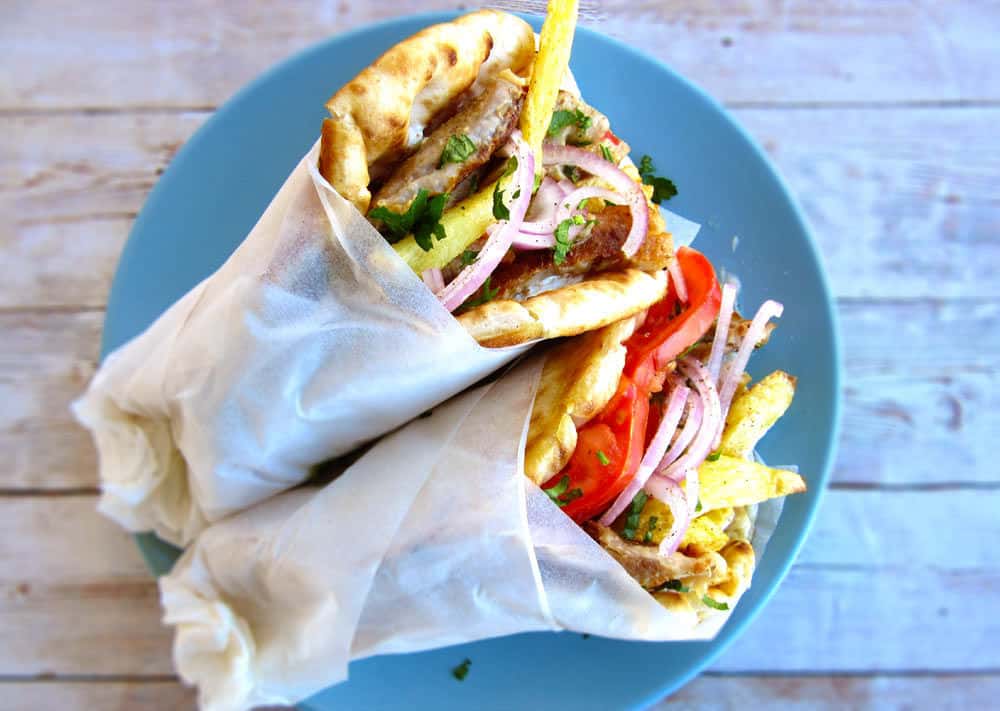 The Type Of Meat And The Other Ingredients

As for the type of meat, in Greece, we make Pork Gyros and Chicken Gyros. Lamb Gyros is made in other countries outside Greece. If you want my opinion though Pork meat makes the best Gyros.

And there are of course other stuff you can add to your Gyros wrap. From different meats like souvlaki and kebabs to different types of sauces like spicy cheese dip, or a mustard-mayo sauce (that they usually add to the Chicken Gyros wrap). I've seen people add Tzatziki along with mustard, ketchup, and the mayonnaise sauce, which really makes me wanna throw up when I see it. I always have mine with "Apo Ola" the traditional way. 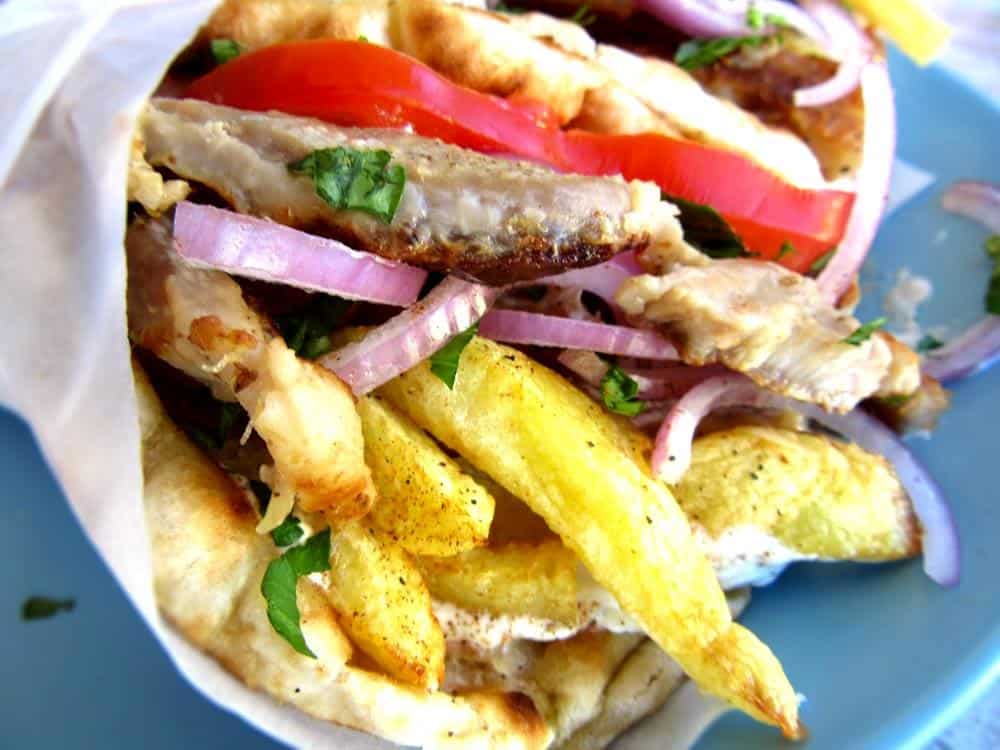 Gyros Recipe Can Be Served As A Portion

There is also another way though, in which we serve Gyros in Greece. And that is, in a form of a meaty pyramid, that sits on top of a Pita Bread that's cut into triangles. This is served as a portion, along with Tzatziki, tomato, and onion slices as a garnish. That we call (Merida Gyros) Portion of Gyros.

The exact meaning of the word Gyros in Greek is "turn". Because it keeps turning. And if you want to know how it's spelled also, then check this song.

So know you know what it is, how to serve it, how to spell it, and maybe even how to sing it. Time to see how to make it also...

To make a really good homemade Gyros that resembles the one we buy in a shop all you need is:

Once you have marinaded Gyros and cooked it, cut it (the pancetta pieces) in half and then into long strips (lengthwise). Add it back to the pan to soak any remaining juices until you are ready to wrap the Pita Gyros. 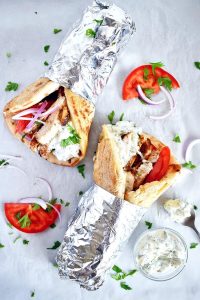 Not a fan of Pork Gyros? Check out my Chicken Gyros Recipe for a lighter version!

Traditionally, Tzatziki is made at least one day before consuming it. In order for the garlic to cool down, and to boost the flavor of the Tzatziki overall. In a Grill house or Greek Taverna, they usually have tons of Tzatziki prepared for the whole week since it lasts long and doesn't spoil (due to the garlic preserving it). The tzatziki in this recipe is one that is quick to make and can be used instantly. Since we only need to make a small amount to use only for the Pita Gyros. Its difference from the Traditional Tzatziki is, that in this one you just mix everything together all at once. If you want to follow the Traditional recipe for making Tzatziki though and get some leftovers out of it, then here it is.

And I don't mean make it from scratch (although you can, if you really feel like cooking). All you need is some store-bought Pita Bread (refrigerated or frozen) and a non-stick pan along with a splash of olive oil. You cook the Pita Bread for 1-2 minutes on each side and your Pita Bread is ready to Rock... Sorry that was to Roll! Or to Rock and Roll. (been watching too many episodes of friends... and Chandler lately)

NOTE: Do not overcook the Pita Bread. It needs to be soft in order to roll easily. 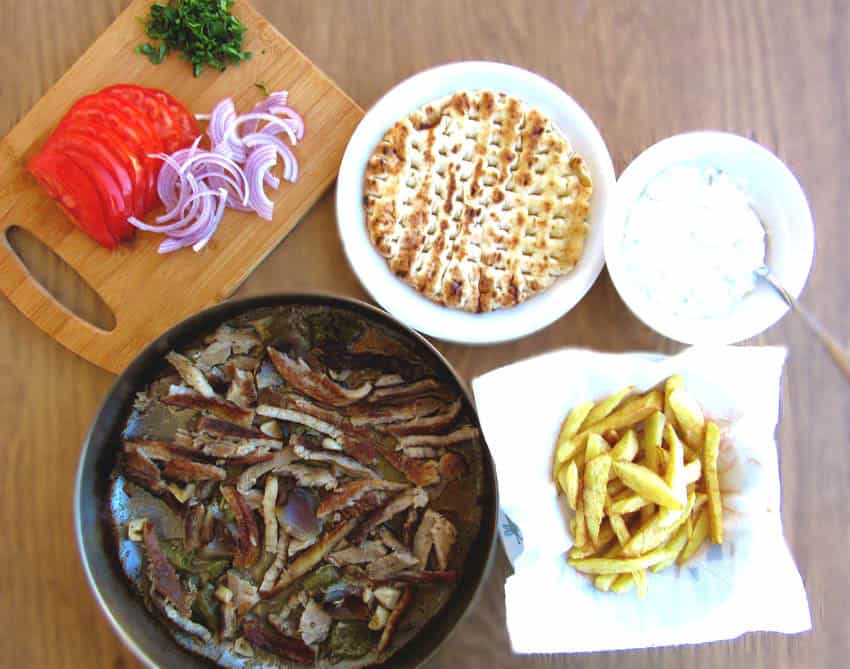 Another thing you definitely must do is, to have all the ingredients for the Pita Gyros prepared and ready to use. Imagine running to fetch the onions or the potatoes while you are holding the Pita on the parchment paper? So make sure you don't forget anything before you start wrapping it together (otherwise, this will be the swearing part of the Pita-making process).

Pita Gyros is traditionally wrapped in parchment paper (and here comes the tricky part of the Gyros Making). The difficulty with wrapping it with parchment paper is, that in order to hold it together, you have to press it tightly. You also have to know how to tuck in the parchment paper, at the bottom of the Pita Wrap. This is something that doesn't happen at once, it's something you have to do a few times in order to understand how it's done. It's like rolling a cigarette, it takes some practice to take it in (so here is your excuse to make more ;)) Do not worry though, as I have a solution for you. If you find the parchment paper difficult, then try some aluminum foil on top of the parchment paper or on its own. It will keep everything wrapped nice and tight. So if you are a more adventurous type, and you are ready to Rock and Roll, then here is the step-by-step way to do it (traditionally) with the parchment paper. If you are not, then just Roll...(using the aluminum foil)

HERE'S HOW TO WRAP A PITA GYROS IN 10 STEPS 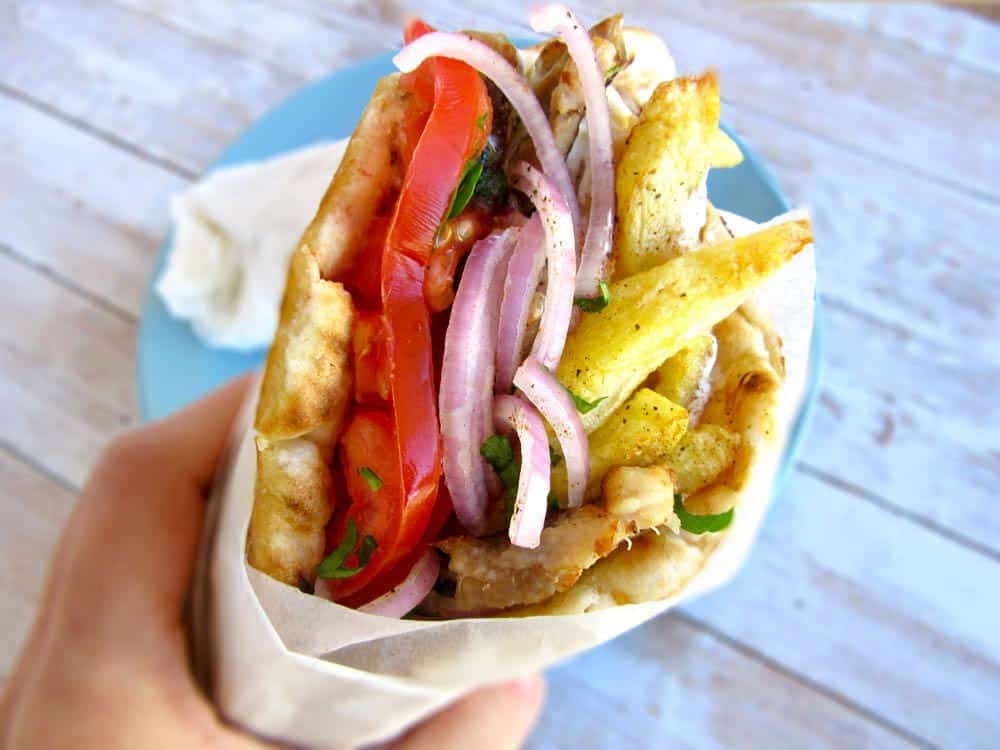 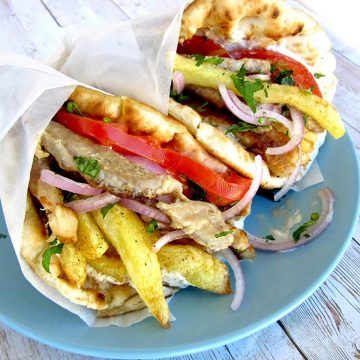 For The Tzatziki Dip:

For The Gyros Wraps:

Making The Marinade 1 Day Before:

if you can't find Pancetta you can instead use pork neck or pork belly. If you use belly though, make sure you remove the outer layer of fat.

These Ingredients add a nice boost of flavor to the Gyros Recipe:

Disclaimer: Please note that If you make a purchase through any of these links above, it will earn me a small commission at no extra cost to you.