Portokalopita is an old-fashioned Greek cake, made with phyllo pastry, Greek yogurt, and soaked in syrup once baked. Whereas Portokalopita refers to a pie it is in fact a denser cake. Portokali in Greek means orange while Pita means pie.

This Greek Orange Cake has been one of Greeks' favorite desserts for "tratarisma" aka treating a house guest. And having lived up to its name it is still served in most Greek restaurants as a treat on the house, after the main dish. So yes, if you have ever been to Greece and you got a dessert at the end of your dinner this was probably it.

And the reasons for Portokalopita being the number one preference as a treat, are:

How To Make Portokalopita

First, you prepare the syrup which has to be at room temperature when poured on the cake. To make it, add the sugar, honey, and cinnamon stick to a cooking pot. Then squeeze two oranges and weigh their juice. Add as much water as needed so both the orange juice and water weigh together 550 grams.

It is important to be precise with measurements when making syrup. So it will get to the right consistency and get properly absorbed by the dessert. This is why you need to weigh the liquid in this recipe.

Put the pot on your stovetop and bring to a boil. Then reduce the heat to medium and simmer for about 10 minutes. No need to stir the syrup just shake the pot a bit if needed. Once the sugar has dissolved completely and the liquid in the pot has a nice syrupy consistency, remove from heat and set aside while you make the cake.

Preparing The Phyllo For Portokalopita

To make this cake, the phyllo has to be cut and air-dried. Some people do this by letting the phyllo uncovered at room temperature for some time. While others (including me and this recipe) prefer to do this in a low-heated oven to both speed up the process, as well as make the phyllo even more crispy.

So to prepare the phyllo for Portokalopita, cut it into small 1-inch pieces 2,5 cm. It doesn't matter if they are even shaped as long as their small enough. You won't be able to tell once mixed into the cake batter. Place in a big pan and try to separate most phyllo pieces from each other. Bake for about 45 minutes at a low temperature of 150°C / 302°F.

Every 15 minutes of baking remove the pan from the oven and toss and flip the phyllo pieces with your hands to help them dry evenly all over.

Once you're done with the phyllo, take a big mixing bowl and combine the remaining ingredients using a hand whisk. No need to use an electric mixer for this.

Then gradually add handfuls of the crispy phyllo into the bowl stirring well each time with a large spoon to help combine the phyllo with the cake mixture. Once all the phyllo has been incorporated, transfer the mixture into an oil-greased pan and bake until deep golden on top. Then pour the syrup over the cake right as it comes out of the oven.

Before refrigerating you have to let the cake reach room temperature first. Just like with any other syrup-soaked cake or dessert. Refrigerating hot syrup may lead to the syrup getting crystallized.

You can either simply add a drizzle of raw honey on top, along with some ground cinnamon. Or even a scoop of Greek yogurt to make it even more refreshing. Some even serve Portokalopita with a scoop of ice cream on top and that's also a yes yes! 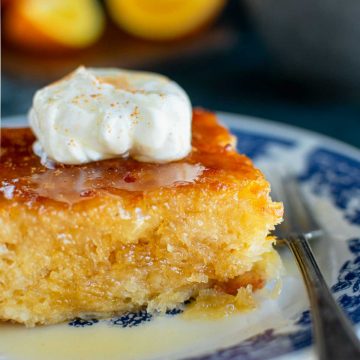 For The Orange Pie:

For The Orange Pie: