Published: Feb 22, 2018 · Updated: Mar 30, 2021 This post may contain affiliate links As an Amazon Associate I earn from qualifying purchases

Tarama is the cured eggs of either carp fish, grey mullet, or cod. In Greece, we have two types of Tarama. The one we call the White one, which is, in fact, a yellowish one and the Pink one. Authentic Tarama is originally white (yellowish), but the pink color is added to it only to make it look more eye-catching. The flavor in both types is almost exactly the same (the white one being a touch stronger).

The Greek Tarama Dip is made using either potatoes or bread as a base, lemon juice, olive oil, onion, and sometimes walnuts or almonds. It’s a favorite Greek Meze, that goes perfectly with Ouzo.

This Dip is one of the highlight dishes during the Greek Lent and Clean Monday. Too much Greek stuff in one paragraph? Don’t worry I’ll explain each one in the text below…

Clean Monday, is the first day of the Greek Lent, which lasts for 40 days until Pascha (Easter). During these days, the people who follow the lent do not consume meat, dairy, and fish. Seafood like mussels, octopus, and squid, for example, are allowed since they do not contain blood in their bodies.

In older times, where people were a lot more religious, Greek Lent was followed by many. Today, most people just follow the lent only during the day of Clean Monday, and during the last week before Easter. The last week before Easter, is what we call the Long week. Because it’s the week that the suffering and death of Christ took place. But that’s all with the religious stuff and time to move to another Traditional Greek topic, MEZEEEE!

Like I said in the text above I’m going to explain every Greek thing I mentioned. So, Greek Tarama Dip (Taramosalata) is a favorite Greek Meze. Meze is what we call in Greece the different small plates, that are served along with alcohol (Traditionally Ouzo or Raki but sometimes even wine) prior to the main meal (in most cases lunch). Meze plates are usually dips, spreads, marinated fish, and seafood, or even cheese. A Meze plate usually contains vinegar, garlic, or lemon in order to be appetizing and make you really hungry for the main meal.

The recipe for Greek Tarama Dip that I’m sharing here is for making both Pink Tarama and White Tarama. The White One has a bit stronger fish flavor and is made with soaked stale bread as a base. While the Pink one has a more subtle fish flavor and is made with potatoes as a base. You can try both or play it safe and make just the pink one which is more widely consumed. Personally, I like both. 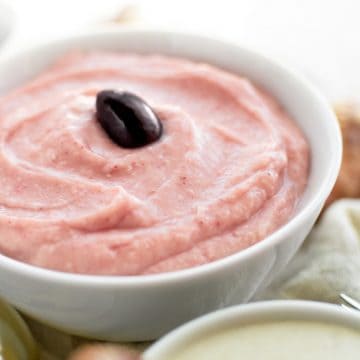 For Making The Pink Tarama:

For Making The White Tarama:

To Make The Pink Tarama:

To Make The White Tarama:

We use cookies to ensure that we give you the best experience on our website. If you continue to use this site we will assume that you are happy with it.OkNoRead more