Wondering what Trahana Soup tastes like? Like a thick very tasty pasta soup with plenty of melted feta cheese inside!

What is Trahana? Trahana is a form of pasta that looks like very coarse breadcrumbs. There are two types of Trahana. Sour Trahana and Sweet Trahana. In this recipe, we use Sour Trahana that you find in grocery stores. And it's the one used traditionally to make this old-fashioned Trahana soup. But if you want to know how the Trahana pasta itself is made and what's the difference between sour and sweet keep reading!

How Is Trahana Pasta Made?

Sour Trahana is made with fermented milk that's left to go sour and then gets mixed with pasta flour. Some people use yogurt instead of milk as a quicker way to make Trahana. Because the milk fermentation takes a few days extra to make.

Most people that hear the word Sour Trahana think it actually tastes sour. But that's not the case. It is as sour as the taste of cheese. Which is in fact, also a fermented milk product. Hence one of the reasons Trahana is almost always cooked following the traditional recipe with plenty of feta cheese. As those two couldn't combine any better together!

Sweet Trahana on the other hand uses plain milk, instead of fermented. Plus butter or eggs in some recipes. And of course, it isn't sweet. It is called this way to distinguish it from sour Trahana.

How To Cook Trahana

To cook Trahana you need to simmer it in plenty of water and/or stock. According to each recipe, you may use chicken stock, vegetable stock, or even beef stock. And in some recipes, Trahana gets cooked in tomato sauce as well.

The more you cook Trahana the thicker it gets. It absorbs liquid a lot. In fact, even when you turn the heat off it keeps getting thicker. That's why it is better served right away. While it's still hot. If it thickens too much, you can always restore it to its former texture by adding a splash of hot water to it and giving it a good stir.

For this traditional Trahana soup, you need sour Trahana, some chicken or vegetable stock, feta cheese, and extra virgin olive oil. You can substitute olive oil for butter. If you prefer to do so, then use about 3 tablespoons of butter and mix it in the soup right before serving. Ideally use fresh butter for a real boost of flavor!

How To Make Traditional Trahana Soup

To make Trahana soup, bring the water to a boil along with the stock inside a medium-sized cooking pot. Then add the Trahana and olive oil. From this point on, you need to drop the heat to medium-low and cook stirring the Trahana very often with a wooden spoon until it's cooked. Stirring is very important for two reasons a.) so the Trahana won't stick together and b.) to avoid Trahana sticking at the bottom of the pot.

It is not as sticky as it sounds. But it is better to keep an eye on and stir occasionally. Trahana takes no more than 15-20 minutes to cook. So you won't keep yourself busy in the kitchen for very long. It's in fact one of the speediest easiest dinners you can make!

And once you are done, serve with some crunchy bread on the side. If it is good old-fashioned sourdough bread, the better. And don't forget to add plenty of freshly ground pepper and perhaps some extra crumbled feta as well on top! 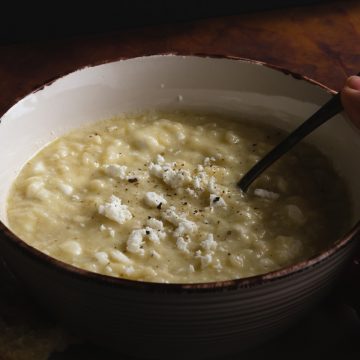